This is a series of blogs starting from the day I was diagnosed with an acoustic neuroma. If you want to start at the beginning then please follow this link:

I am back at work! And I am exhausted.

When do you know it is the right time? I don’t know. I had an occupational health check and was told to start on half a day per week! I managed to negotiate this to a day per week and then to phase it as I felt fit. We agreed that I was to start on administrative and management duties only, then build on the clinical and eventually start operating, which I will do in the next week (first week in September).

I look in the mirror and I see an older but normal me but I know that I am not really back to normal. One of my colleagues stated that ‘once you let air to the brain, it is never the same again’. It certainly feels like my brain has shifted in the way that it works and I really hope that it will go back to normal. I have to write thoughts down and am constantly texting myself lists so that I do not forget anything. My brain does not switch off at night and I am struggling to sleep well. I find that my balance does change when I am tired and I get tired very quickly. It is difficult to moan as there are many people in the Facebook group who are still off work at 6 months and really do not feel able to start back as yet. They have had occupational health visits at home and describe the feeling of not being believed as to how they feel, as they look normal and have to explain their headaches, dizziness and fatigue.  Everyone is so different and you are the only one who will know what is right for you.

Others in the Acoustic Neuroma support groups also talk about the travel insurance policies, which are shockingly high pre and post surgery, which might be expected. Acoustic neuromas are very slow-growing and if found when small, can be managed on a watch and wait policy. I was shocked to find that these patients are also having to pay a much higher insurance policy even though the medical risk is very, very small. I am sure we need to educate the insurance policy makers that these acoustic neuromas cannot just be included in the ‘brain tumour’ category!

Being back at work is strange as I am not really responsible for the patients on the ward as there is an excellent locum covering my duties. I am picking up my Clinical Director duties and it feels as if I have never been away. The NHS finances are very tight, there is no doubt that we need investment but it is our duty to make sure that we use the public purse well. Even thought the NHS is stretched so thinly, the NHS family are desperately ensuring that this disinvestment does not impact on patient care and safety and I feel very strongly that this aspect should not be compromised. I enjoy the budgets and business part of the NHS as much as looking after my patients and trainees and it is actually quite nice having protected time to do it as well as I can.

I keep getting hugs and well wishes from my trainees and also from my patients who spot me in the corridors of the hospital. Each time this happens it reminds me how lucky I am to be working in Croydon, where most patients who live in Croydon come to Croydon University Hospital and so you get to know people really well over 14 years! My colleagues are shocked that I have come back so early and have been very protective of me but yet so supportive. I still keep getting flowers!

Whilst life inside the hospital does not seem to have changed very much, life in the real world has been a whirlwind.

In the last three 3 months, there has been a General Election. I watched with excitement as the NHS became a political ‘hot’ topic again and really hoped that whoever won, there might be a change in the future planning of the NHS and then was very disappointed to see that there is no real change. There appeared to be a public movement to ensure that the NHS remained publicly available and accessible in the way it was founded and I hope that this continues. This was palpable at ‘The Specials’ concert that I attended with my family. They were amazing but the NHS was central to the banter between the crowd and the band. If you have never heard of the Specials, then take time to listen to one of their tracks over the weekend! Lots of memories from my childhood.

And then there was the Grenfell tower fire. I have never seen anything like it. I was interviewing when I first heard about it and was shocked to see the extent of what had happened so quickly. I am sure my emotions just copied everyone else. I was brought to tears on hearing and seeing the horrific events that unfolded, amazed and proud of the people in this country who just came out to help and saddened by the lack of organisation demonstrated by authorities at the time. I started crying seeing the mountains of donations and realising that there were so few survivors to actually claim them. The shocking revelation as to why the fire may have gripped hold so quickly followed by the assessment of so many towers across the UK just brought home the message that we need to manage the public purse but not by putting people in harm’s way. The haunting image of the firefighters sitting exhausted against the backdrop of Grenfell tower with tears in their eyes will remain imprinted in my memory forever.

There have also been two tragic attacks in London and the attack in Manchester.  I had friends and trainees involved in the care of the London victims. The toll on the victims and their families cannot be imagined. There is also a toll on the Emergency Services and the NHS staff who also need debriefing and will take time to come to terms with what they have seen.

I went for a drink with my sister in a London roof top bar. We spent a lovely evening in the sun and I had my first drink of alcohol since my surgery. As we both looked out across London’s skyline and the bridges that span the Thames, we could not stop feeling saddened at the events of the previous weeks and of Manchester where innocent adults and children had become victims of a war that has not been declared officially but had become an entity insidiously.

Even though these events had occurred so recently, it was great to see London alive and kicking. We will not give up our liberties and way of life through fear and violence! 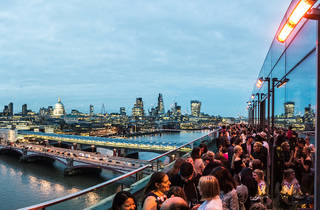 I also spent a great evening with friends in Twickenham at a restaurant ‘Mosaico’. It is a lovely Italian restaurant and I went with friends from across the world. We sat and ate gorgeous food, drank wines imported from the globe and listened to Jazz music played by a Brazilian group. This is how we should be living, enjoying the best of all cultures and respecting that there are differences amongst us all but that they CAN be overcome.